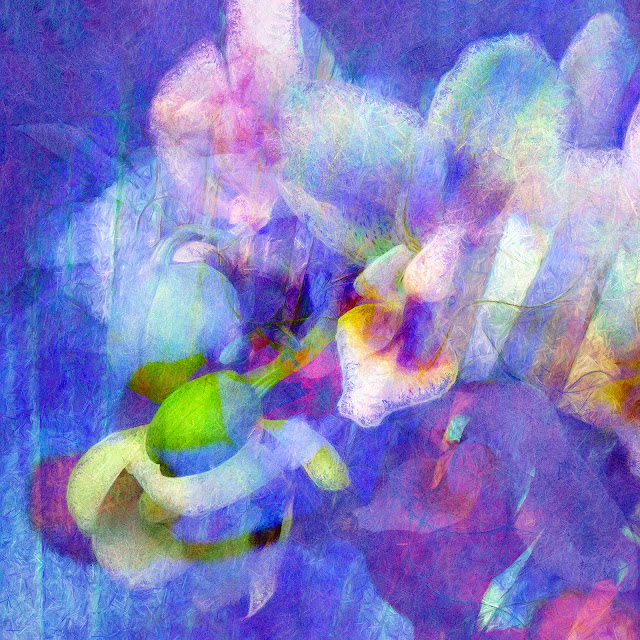 I wanted something bright and cheerful tonight, a little tropical in feeling. This is a digital art piece composed with multiple photographs I took of an orchid plant from different angles. Prints, framed prints, and prints on canvas, metal, acrylic, etc. are available. 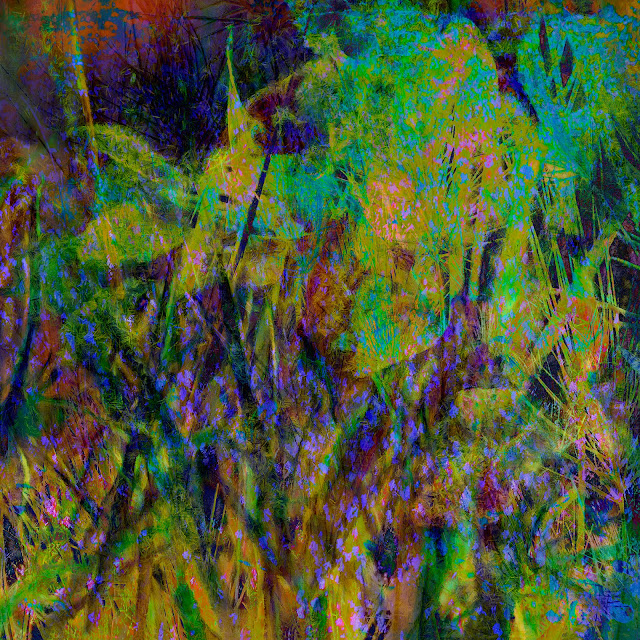 I'm exploring a theme in my work that has headed into strange territory lately. I've been breaking the "rule" of simplifying my work and instead add more complexity. I would say that my subject matter is complexity—the multiplicity of life experience and the complexity inherent in the natural world. Nothing exists separately from anything else. Everything in the natural world lives in relationship. And we don't experience the world like a camera that freezes whatever we point it at and leaves out the rest. We take in multiple impressions at a single time, especially as we move through an environment, sometimes combined with the thoughts in our head which may be focussed on something entirely different than what is actually there.
I add multiple images together—sometimes different angles of the same scene, sometimes unrelated images that I imagine might belong together. Sometimes it works, sometimes it doesn't. I reject more ideas than not. It's an experience of discovery—trying unusual things I was certainly never taught to do in three different photo-editing programs and seeing what develops. That's what I like about the process—I wind up seeing things in my work I didn't know where there before. Or the process itself creates something new I would not have expected. It adds an element of surprise and wonder that was otherwise absent, for me, in most of the art I have tended to do before.
In this piece I'm using multiple layered photographs of flowers and other garden plants (all my original work) with multiple digital effects to create an abstract landscape. Prints, framed prints, and prints on canvas, metal, acrylic, etc. are available.
Posted by Sheryl Karas at 10:35 PM 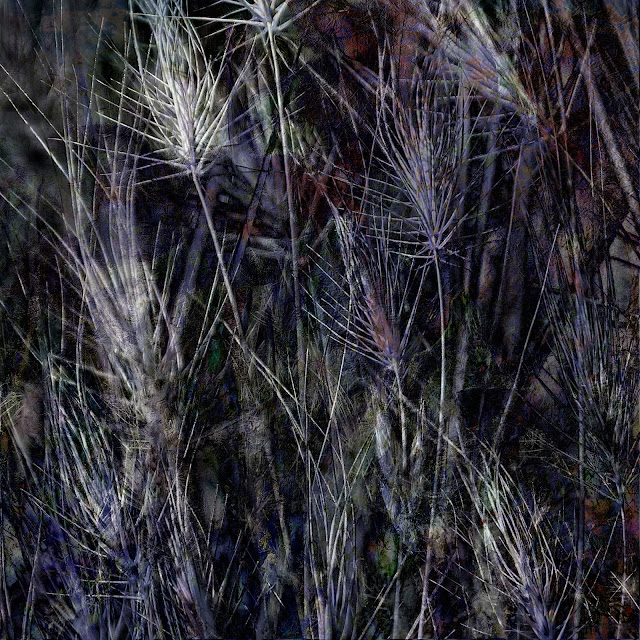 Imagine that you're walking in a deep dark forest. Now imagine that you are a mouse and the forest is actually a meadow of plants. That's what this is. It's made of multiple layered photos, combined with multiple effects. Prints, framed prints, prints on canvas, metal, acrylic, etc. are available. 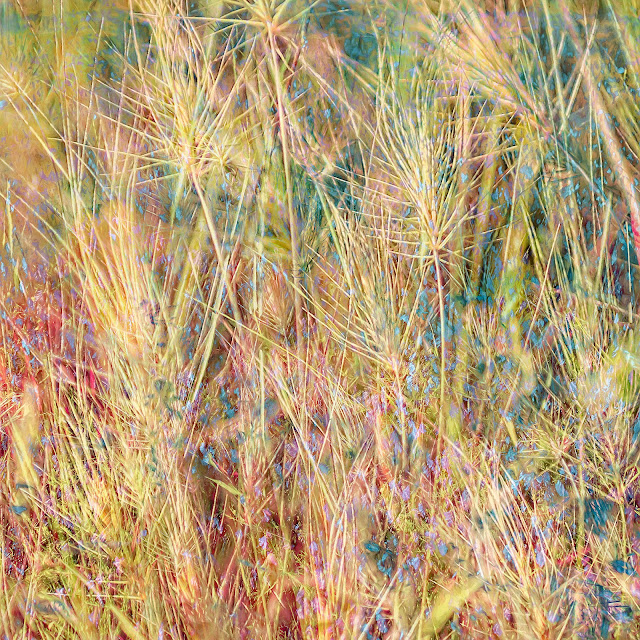 This very experimental piece is composed of 3-4 original photos of the same open meadow that used to exist across the street from where I live. It's all filled in with houses now but the photos still exist. In this piece I was trying to show both the movement of the plants in the wind and the details of the plants when the wind momentarily stops. Prints, framed prints, and prints on canvas, metal, acrylic, etc. are available.

The Colors of Grass 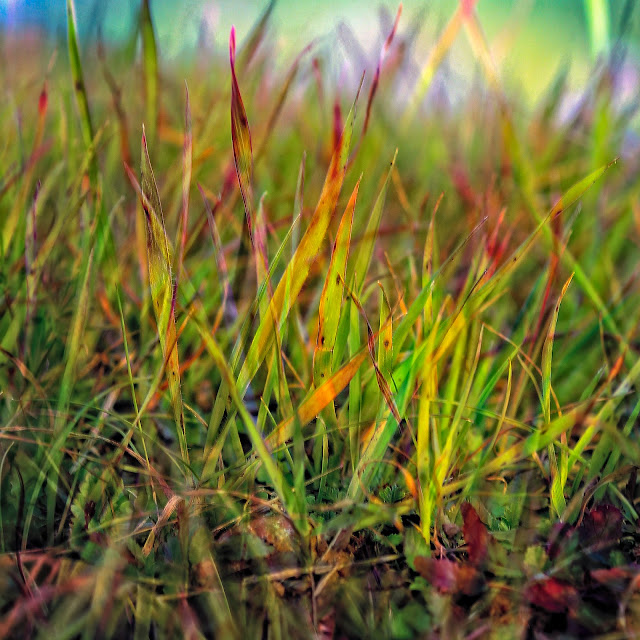 I have memories of myself as a tiny child sitting in the grass, tearing up clumps, and looking at it. I loved doing that and could entertain myself for what seemed like hours (from a toddler's perspective). I guess the experience stuck with me because here I am sharing photos of grass AGAIN. Prints, framed prints, and prints on canvas, metal, acrylic, etc.

The Battle Between Grass and Fence Crystalized 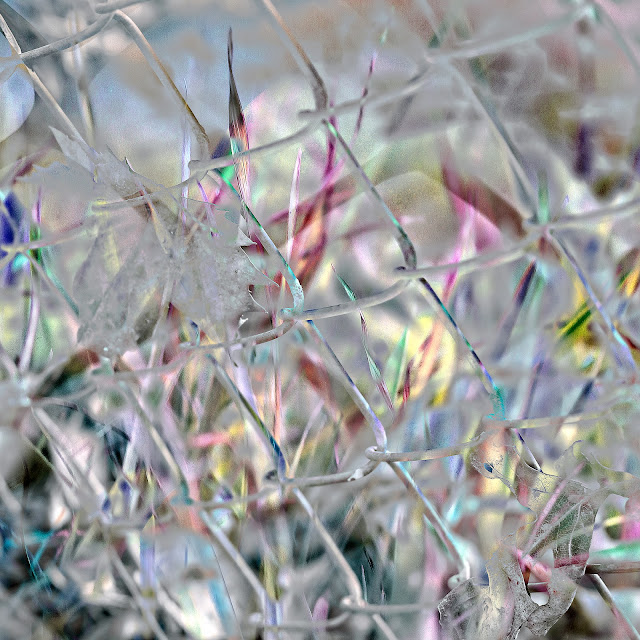 The Battle Between Grass and Fence The battle continues! This is an ongoing theme I think because, ultimately, grass always wins. This is multi-image digital art made from three of my original photos. Prints, framed prints, and prints on canvas, metal, acrylic and other products are available. 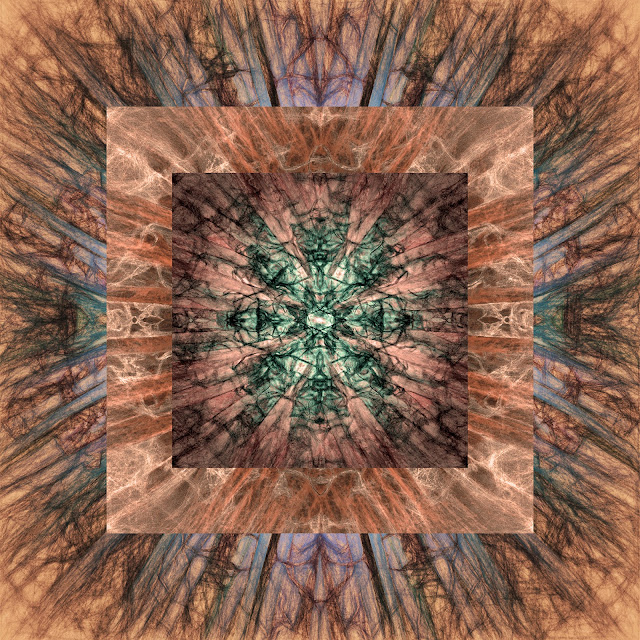 This started life as a photograph of a Yucca plant in the high desert of Arizona . . . but it evolved. The Yucca flower can only be pollinated by being visited by the Yucca Moth. Can you see the moths in this piece? I didn't put them there on purpose. They just showed up.

The Yucca in flower essence therapy is for holding fast to your life purpose even in challenging circumstances. It might seem almost impossible to have to depend on that one special moth to arrive . . . but it does.

You can find framed prints and prints on canvas, metal, wood and acrylic in my Fine Art America shop. Also a nice looking totebag and other items!

I made cut paper bats one year to decorate for Halloween and later scanned them into my computer. Now they're an animated GIF to make you smile! Available on Voice now.

The Pendulum Swung Clear Off the Clock (Animated GIF NFT)

This was my reaction to the outcome of the 2016 U.S. presidential election. The name is "The Pendulum Swung Clear Off the Clock and For A Period of Time Nothing Else Seemed to Matter." It was like going out of time so when I turned my painting into an animated GIF I made the clockface spin backwards. And that made the hands of the clock, eventually, start to look like they were moving chaotically. An optical illusion actually, but people not trusting what reality is anymore is part of our lives now, isn't it? This NFT is now available exclusively on Voice.